2018 was a big year for me, filled with life developments, new adventures, and lots of change. Having spent 3 years working at Orchard, a financial technology startup in the online lending space, I was ready for a change. I decided in early 2018 to leave and take some time off, not having a clear sense of what I wanted to do next. This was the first time since graduating from college that I had left a job without a plan, and I was both nervous and excited. Luckily, my fears that this would make me unemployable, cripple my ability to negotiate a salary, and generally ruin my life turned out to be unfounded! I spent four months traveling, working on side projects, exploring New York City, and trying to figure out what I wanted to do next. I learned to ski, and I got really into it, spending a total of ten days on the slopes between January and March. I got engaged and will be getting married this year! I also spent more time visiting home, Ohio, than I think I have in total in all other years since I graduated from college. Finally, I was able to devote more time to creating the data-driven art that I sell on Etsy, growing my sales by 3x and my revenues more than 5x from 2017! 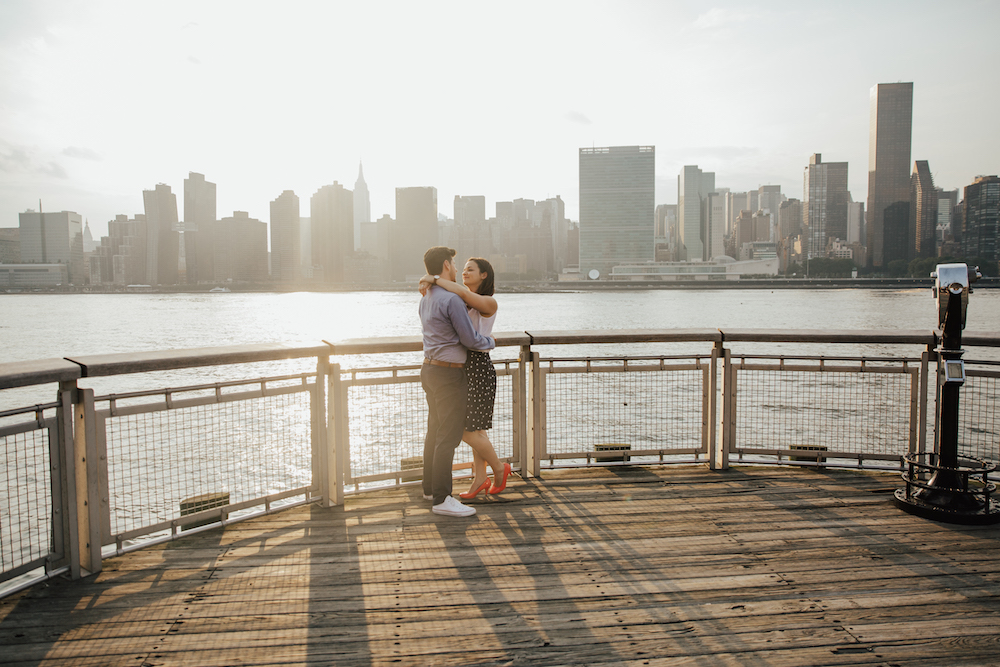 As I considered what I wanted to do next, I thought back on my career and where I was uniquely qualified to help people. In my time at Orchard, I had grown from a data scientist into a senior data scientist, built out a team of my own, and ultimately became the head of research. I had a broad mandate to dig through Orchard's massive financial dataset to find meaningful insights that might help our clients and to write about them in blog posts, white papers, and newsletters. I enjoyed the work of finding new insights that others had not yet uncovered, and I especially enjoyed the task of visualizing and explaining those insights to others in an accessible way. I became quite good at it, and my writing brought tens of thousands of readers--and potential clients--to Orchard. My writing also gained significant press coverage, with my work covered by the Financial Times, CNBC, Inc, and MarketWatch, among others. I was excited to be able to contribute so much to Orchard's brand and market position with my data analysis and writing. Everybody in the industry was familiar with Orchard and the quality work we did, which enabled our sales team to get meetings with nearly any company they wanted.

What surprised me at the time--and still does today--was how few companies were leveraging their data to create content and expand their reach. In 2019, it's hard to find a company that isn't using their data to improve internal decision-making and forecasting. "Big Data", "Machine Learning", and "Artificial Intelligence" are buzzwords that can be heard across boardrooms from Silicon Valley to New York City. Still, the unique datasets possessed by most technology companies today are vastly underutilized when it comes to generating compelling content, building a brand, and establishing credibility. Almost nobody was doing what I had done at Orchard, and nobody was doing it to the extent that I had done it. Those companies that do share insights from their data--Airbnb, Facebook, Netflix, Stitch Fix, Uber--usually do so through an engineering blog, with highly technical content aimed more at finding new employees than finding new customers. There's nothing wrong with that, of course, but companies should also be using their data to create compelling content for their customers that helps build awareness, credibility, and trust. This idea is already well established at large financial companies, who often provide market research for free with the goal of building client trust, gaining credibility, establishing relationships, and making more sales. In technology, however, where companies can generate even more impact given the unique datasets at their disposal, almost nobody is doing this! I knew that this was too big an opportunity to let pass, and I knew that I was the perfect person to help companies better leverage their data in this way. I created a company, Michael Toth Analytics, and started working on this idea full time in October. It's still early days, but I'm getting positive responses and am optimistic about the new year.

Working as a consultant means that I don't have many long-term projects like I would at a typical job. In some ways, this is nice, as it means I don't end up maintaining projects that have grown boring and uninteresting to me. But there are downsides as well. I like the feeling of accomplishment that comes with building something up over time and seeing it evolve. With that in mind, I've decided to start blogging more frequently again. In particular, one of my New Year's Resolutions for 2019 is to blog at least biweekly, for a total of 26 blog posts in 2019. I credit much of my professional success in recent years to work directly related to this blog. It helped me secure my first data science job at Orchard, moving from a financial analytics role at BlackRock where I had spent four years. I knew that data science was a competitive field to break into, and I was worried about my lack of formal training. I had self-studied data science through Coursera and similar sites, but that was it. So, before applying to Orchard, I took the time to research and write a blog post using publicly available data from Lending Club, then the largest company in Orchard's industry. As a direct result of that blog post, my resume floated to the top of their pile, my interviews felt largely like a formality, as they already knew I was capable of the exact work they wanted me to do, and I ended up securing a position. This was a huge success for a relatively small time investment on my part.

This is a brief aside, but I highly recommend this approach to aspiring data scientists, or to anybody looking to make a move in their career. If you can demonstrate to your target company that you're skilled, competent, and hard-working ahead of time, you will be lightyears ahead of your competitition. Look--I know that applying for jobs is daunting. A quick LinkedIn search for data scientist positions showed me jobs that had been posted for two days that already had hundreds of applicants. Having been on the hiring side, I can also confirm that these figures are true. But they're also incredibly misleading. Jobs I've hired for have indeed received hundreds of applications, but the vast majority of those applications were immediately filtered out. Probably 5%-10% of the people who applied for my jobs demonstrated that they had relevant skills to do the work. Probably only 1%-2% had any specific domain expertise relevant to the position. For a job that received 500 applicants, I might have 5-10 people who seemed like qualified applicants. Imagine if you were a qualified applicant and had also written a blog post about the very challenges that company is facing, demonstrating your commitment, your work ethic, and your expertise! The worst thing that could happen is you spend a few hours working on a blog post, learn a few things, and don't ultimately get the job. The best thing that could happen is you get the exact job you're looking for, and you come into the company looking like the expert that you are, possibly commanding a significantly higher salary than you would otherwise! Almost nobody does this, but it's such a huge game changer that I cannot possibly recommend this approach more highly. Now, moving on!

This blog has also helped me to establish my presence online. In 2017, I wrote a sentiment analysis of Warren Buffett's Letters to Shareholders that went viral and earned me significant press coverage, which was pretty exciting! I've also been able to grow my following on Twitter, with over 4000 like-minded professional contacts following me there. Additionally, the blog has allowed me to explore new data science and data visualization techniques that have significantly improved my abilities over the years. All I need to do to confirm this is look at some of my earlier posts to see how far I've come.

Anyway, all this to say, I've seen enormous benefits over the years as a direct result of the work that I've done on this blog. Still, sitting down and writing a blog post that may or may not gain any traction has always been a challenge. I obsess over each post, wanting it to be perfect, which ends up taking a significant chunk of time. To address that, I want to force myself to blog more frequently to remove some of the pressure I feel for any particular post to be perfect. I'm reminded of the story of the ceramics teacher from the book Art & Fear by David Bayles & Ted Orland:

The ceramics teacher announced on opening day that he was dividing the class into two groups. All those on the left side of the studio, he said, would be graded solely on the quantity of work they produced, all those on the right solely on its quality.

His procedure was simple: on the final day of class he would bring in his bathroom scales and weigh the work of the “quantity” group: fifty pounds of pots rated an “A”, forty pounds a “B”, and so on. Those being graded on “quality”, however, needed to produce only one pot – albeit a perfect one – to get an “A”.

Well, came grading time and a curious fact emerged: the works of highest quality were all produced by the group being graded for quantity. It seems that while the “quantity” group was busily churning out piles of work – and learning from their mistakes – the “quality” group had sat theorizing about perfection, and in the end had little more to show for their efforts than grandiose theories and a pile of dead clay.

When you produce a large body of work, some of the work you create will be great, and some will be poor. But over time you develop your skills and your work improves. I think my goal of biweekly blog posts will help me to overcome the fear of putting work out there and hopefully result in a significant improvement to my abilities over the course of the year. We'll see!

While this blog has always been and will continue to be primarily a data science and data visualization blog, I also intend to write some different content this year, similar to today's post. There are two reasons for this. First, I feel that only posting data analysis is unnecessarily constraining. Second, I think that I have relied on data science blog posts as a bit of a crutch, allowing me to put myself out there without really exposing myself to any vulnerability or potential criticism. As long as I'm presenting facts based on data analysis, it feels that there is not much room for criticism. This type of post allows me to express my thoughts and opinions, be vulnerable, and become more comfortable putting myself and my ideas into the world. This is a skill I definitely want to develop, and I hope to continue this both here and on Twitter in 2019.

This blog post has gotten quite long, so I will end here. While 2018 was a big year for me, I'm looking forward to 2019, and I think that it might be even better! I'll be publishing here every two weeks, and you can follow me on Twitter if you're interested in getting notified when a new one is available!