In this post I will discuss the background for my percolation visualization page and the details of my implementation. I hope to provide a good introduction to percolation theory and the union find algorithm in particular. This is the first non-trivial Javascript application I've created, and later in the post I will discuss some of the biggest challenges I faced and things I learned along the way.

The inspiration and idea for this project came directly from the similar programming assignment in Robert Sedgwick's and Kevin Wayne's Algorithms class on Coursera. In the class I implemented a percolation system in Java, and afterward I thought that it would be an interesting challenge to port that to Javascript and create a visualization on my website. For the web version I use Javascript for all of the calculations, and I use the HTML canvas element to draw the visualization to the screen.

Connectivity and the Union Find Algorithm

A connectivity problem seeks to determine, given a directed graph of sites such as the one below, whether two sites are connected via any path.

For a small set of sites like this one, a brute force approach would solve the problem effectively. If we wanted to see whether site 2 was connected to site 8, we could recursively check each site's neighbors to ultimately determine that they are connected. As the number of sites grows large however, this method does not scale, and we need a better solution. Instead of thinking of the grid of sites as a directed graph, we can convey the same information as a grouping of components as seen in the image below. Now, determining whether any two sites are connected is as simple as checking whether they are both members of the same component. Connecting two sites under this new representation involves merging their components rather than drawing paths.

Find: Return the id of the component to which the given site is a member
Union: Connect two sites by combining their two components into a single component with the same id

A new Union Find data structure of size N is initialized with N distinct components. In a numerical representation, the id of each component when initialized is simply the value of the site. Calls to the Union operation create a tree of components such that when two sets are combined, the members of one set will point to those of the other set. The id of the merged component is the id of the root node of this tree. The find operation returns the id of a site by traversing to the top of the tree to find the root member component id.

In this implementation, the find operation takes time proportional to the depth of the tree. A naive implementation of the union operation could allow trees to potentially become very deep, which would slow the performance of this algorithm. Instead, if we modify the union function such that we always append the smaller component to the larger component, we reduce the maximum depth of the tree and ensure that the algorithm takes O(nlg(n)) time in the worst case.

Abbreviated Proof:
- Note: lg = log base 2
- For a given node x, its depth in the tree will increase by 1 when its tree T1 is merged into another tree T2.
- When this happens, the size of x's tree will at least double, because our union operation requires size(T2) > size(T1) for T1 to point to T2.
- Through any number of union operations, the size of x's tree can double at most lg(N) times [ lg(2^N) = N ], and N is the total number of nodes.
- Therefore: Traversals take O(nlg(n)) in the worst case


Below I have included my complete Javascript code for the Union Find data structure. This code is essentially the same as the Java code presented in the Coursera class mentioned above. We include two operations in addition to the find and union operations: a connected operation that returns true if two sites are connected and a count variable that returns the number of unique components. 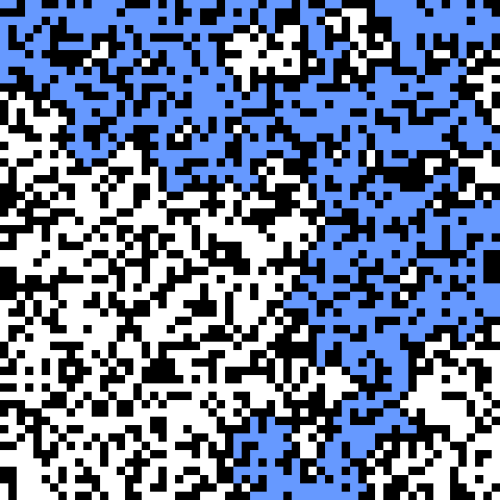 Initially I had thought to create the grid of sites using a grid of divs which I would then be able to color according to their status, similar to my previous Mondrian Painting Project. I wanted to support the ability to change the size of the grid however, and a large number of divs seemed unnecessarily cumbersome. I did some searching on Codepen.io for ideas, and found some examples using the HTML5 canvas element, which was exactly what I needed. In particular, I liked that this output as an image that was saveable. I got to learn a lot about the HTML canvas and how it worked, and this was a fun part of the project.

I had trouble initially with porting the Java code to Javascript. In Java, the well-defined class relationships were clear to me, but I did not at first understand how to implement similar structures in Javascript. After doing some research, I found that there were many ways in Javascript to accomplish a similar thing, and I ultimately used functions to implement this as they were most syntactically similar and I found this approach easiest to understand. I am still working to understand many aspects of Javascript, but this project helped my greatly with learning about how to modularize my code.

Initially I implemented the process of opening sites and drawing to the canvas using a while loop, but this was not ideal. I could run the entire percolation simulation and then draw to the canvas, but if I tried drawing to the canvas after each site was opened, the browser would freeze. I wanted to be able to show each site being opened successively, so I needed to find a way to delay the opening of new sites until I could draw to the screen. I ended up accomplishing this through the use of Javascript's setInterval method. I ultimately used both implementations, allowing the user to choose whether to output the results instantly (using the while loop) or to output the results iteratively at two different speeds (using setInterval). The timing is controlled by the code shown below:

My initial implementation suffered from a bug where if I reran the simulation, either by refreshing the page or by clicking the button to run again, the first percolation run would continue in the background. This caused issues with the display and text output to the screen. I knew that the solution would be to clear the interval on rerun, but I did not know how I could access the id of setInterval, an instance variable of the previous simulatePercolation instance, when creating a new instance of percolation. After some experimentation, I found that if I declared the interval variable in the head of my HTML, rather than in a separate javascript file, I could assign it to setInterval when running simulatePercolation, which would eliminate the possibility of duplicate intervals running simultaneously, and correct the issues that I had been facing.

See the full code for my percolation visualization on my Github: Percolation